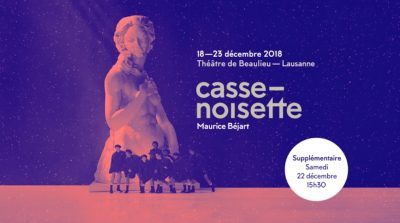 Following the positive response to the announcement of the return of Nutcracker by Maurice Béjart at the Beaulieu Theater in Lausanne, an extra representation has been added on Saturday December 22, 2018 at 3:30 pm. After 19 years, Nutcracker is back in Lausanne for 7 shows, from December 18 to 23, 2018. This edition is a tribute to the accordionist Yvette Horner who passed away on June 11, 2018.

Navigating Tchaikovsky’s musical score, Maurice Béjart revisits his childhood: celebrating Christmas before his mother’s passing when he was only 7 years old, as well as his mythical heroes – Felix the Cat, Mephisto and Marius Petipa. During Nutcracker’s creation in 1998, Maurice Béjart called upon the accordionist Yvette Horner to play on stage the popular French music, in addition to Tchaikovsky’s original score. Considered as the “Queen of the Bal-Musette”, Yvette Horner and her music symbolize not only Maurice Béjart’s childhood memories but also Paris.

Tickets for all representations are still available and can be purchased online, by phone 0900 800 800 (CHF 1.19/min) or at selling points at Coop City, La Poste, Manor.