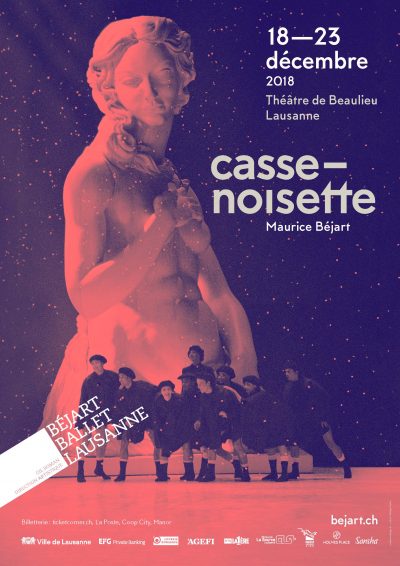 Take a look at the poster designed for Béjart Ballet Lausanne’s next show, Nutcracker by Maurice Béjart, which will be presented from December 18-23 at the Beaulieu Theater.  This ballet was played for the first time on October 4 1998 at the Royal Theater of Turin and is now returning to Lausanne for the holiday season – 19 years after its last show in Switzerland.

The art work was done by Avalanche Design from Montreux. The visual revisits a picture taken by the Lausanne based photographer Philippe Pache during the Swiss premiere of the show at the Lausanne Metropole in December 1998.

In this autobiographical piece, Maurice Béjart doesn’t take up Marius Petipa’s argument, whose ballet was created in 1982 in Saint-Petersburg, but he does evoke his childhood. Piotr Ilitch Tchaïkovski’s partition is the only one that was entirely preserved.

Maurice’s universe unfolds right before the eyes of the spectators—his Christmas celebrations with his family before his mother’s death when he was only 7 years old, his fascination for Fellini’s magical world, as well as his mythical heroes: Felix the Cat, Mephisto and Marius Petipa, whom he imagines roaming down the “Canebière” (Marseille’s historic high street)… The accordionist Yvette Horner also took part in the show by representing the popular French music Maurice grew up listening to, complementing the Spanish, Arabic and Chinese dancing from the original partition.

More information about the show in our Agenda.