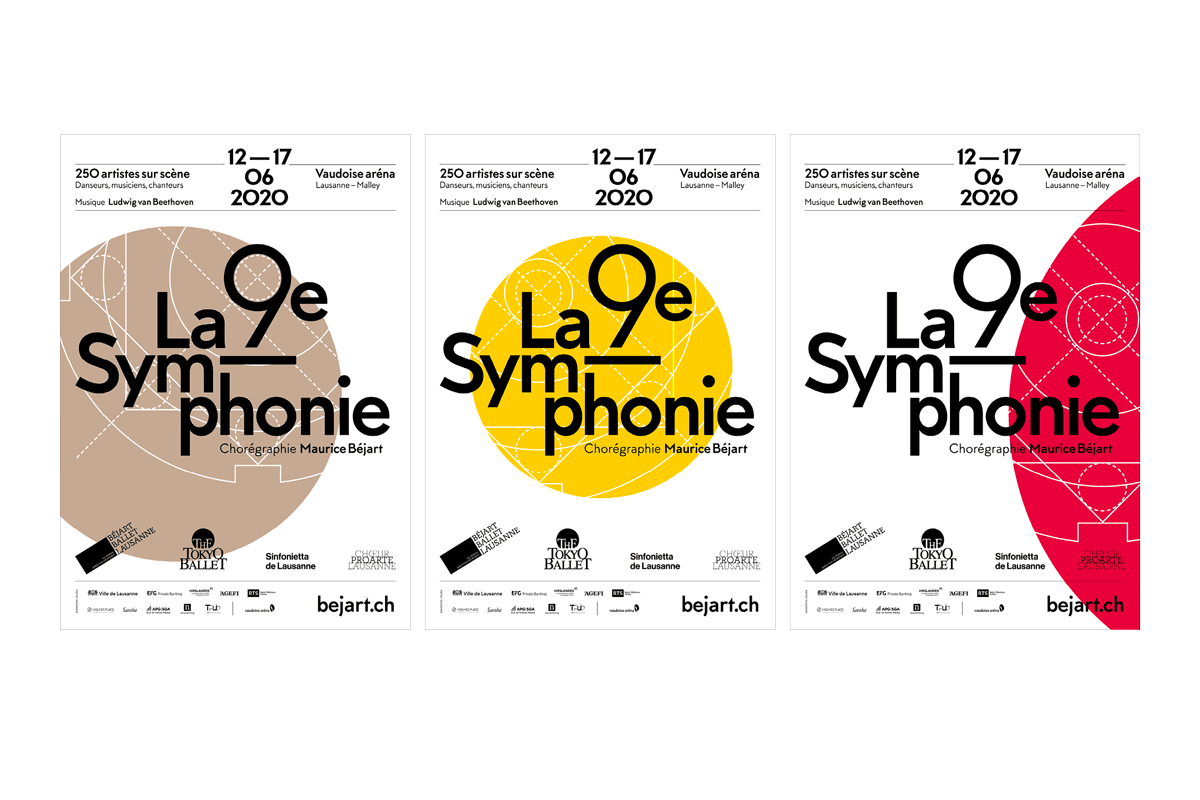 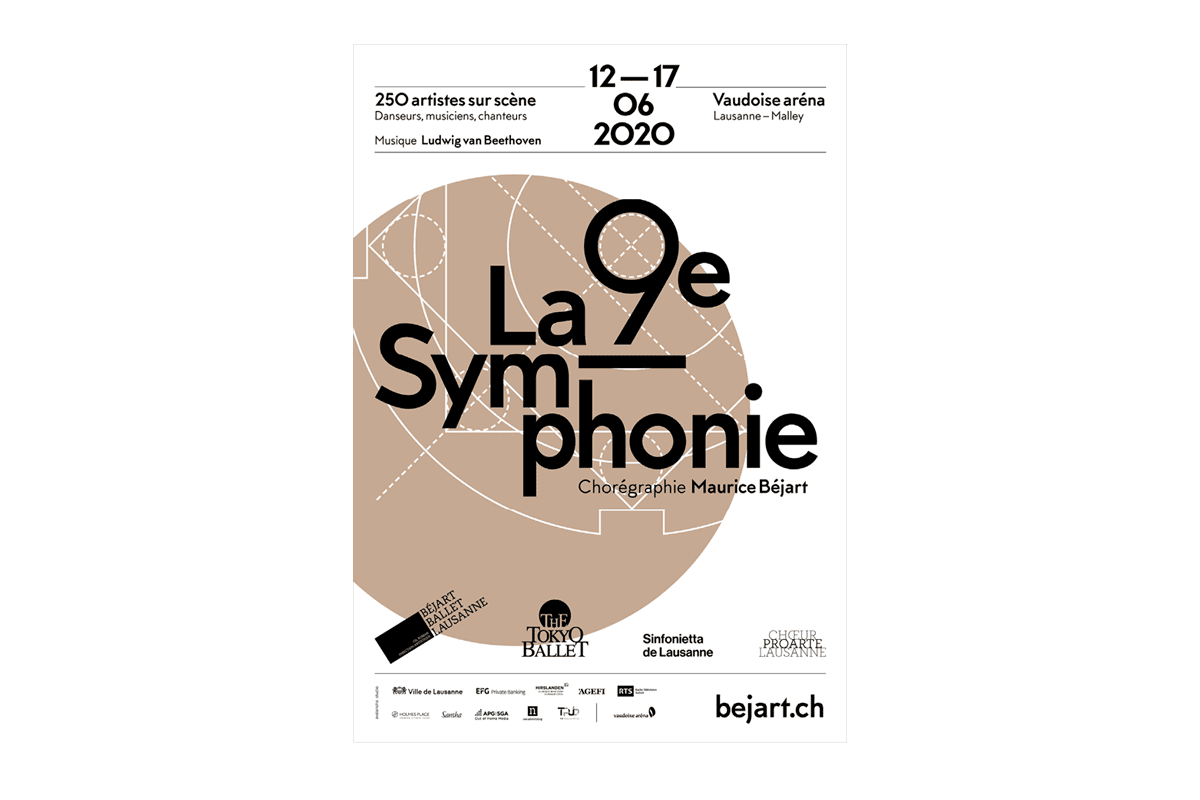 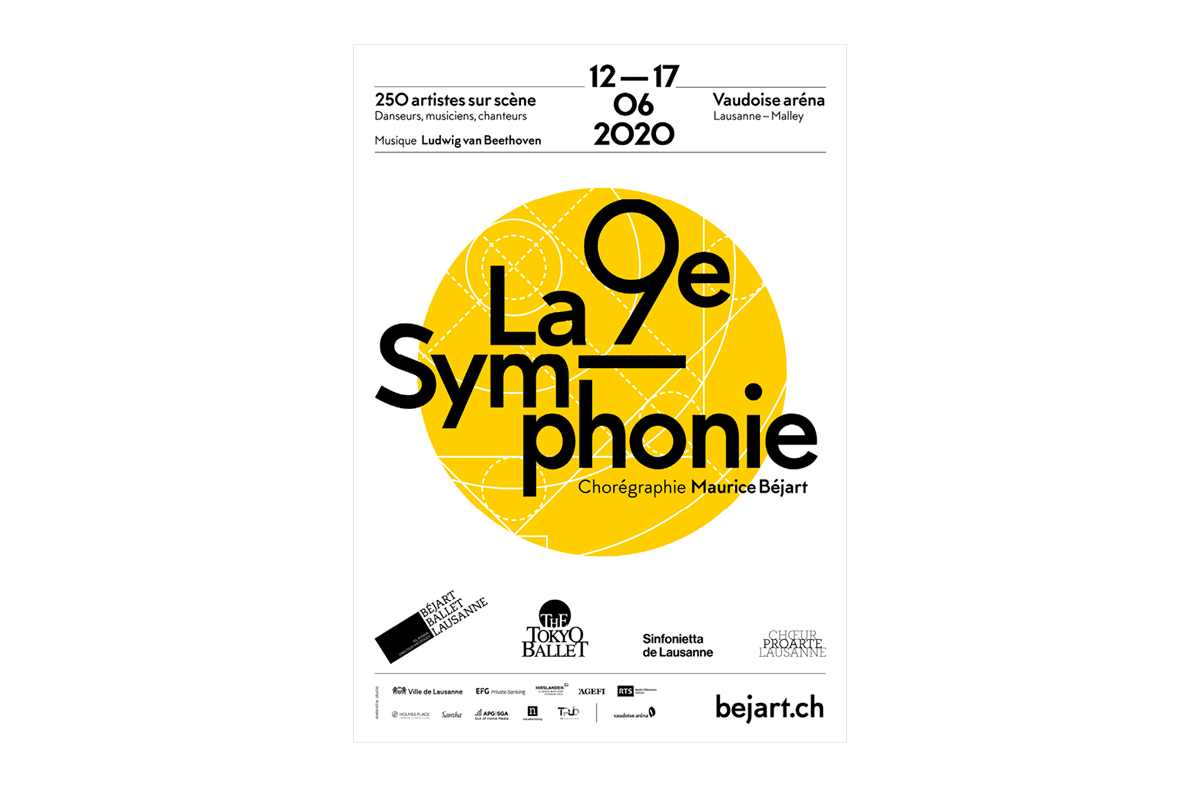 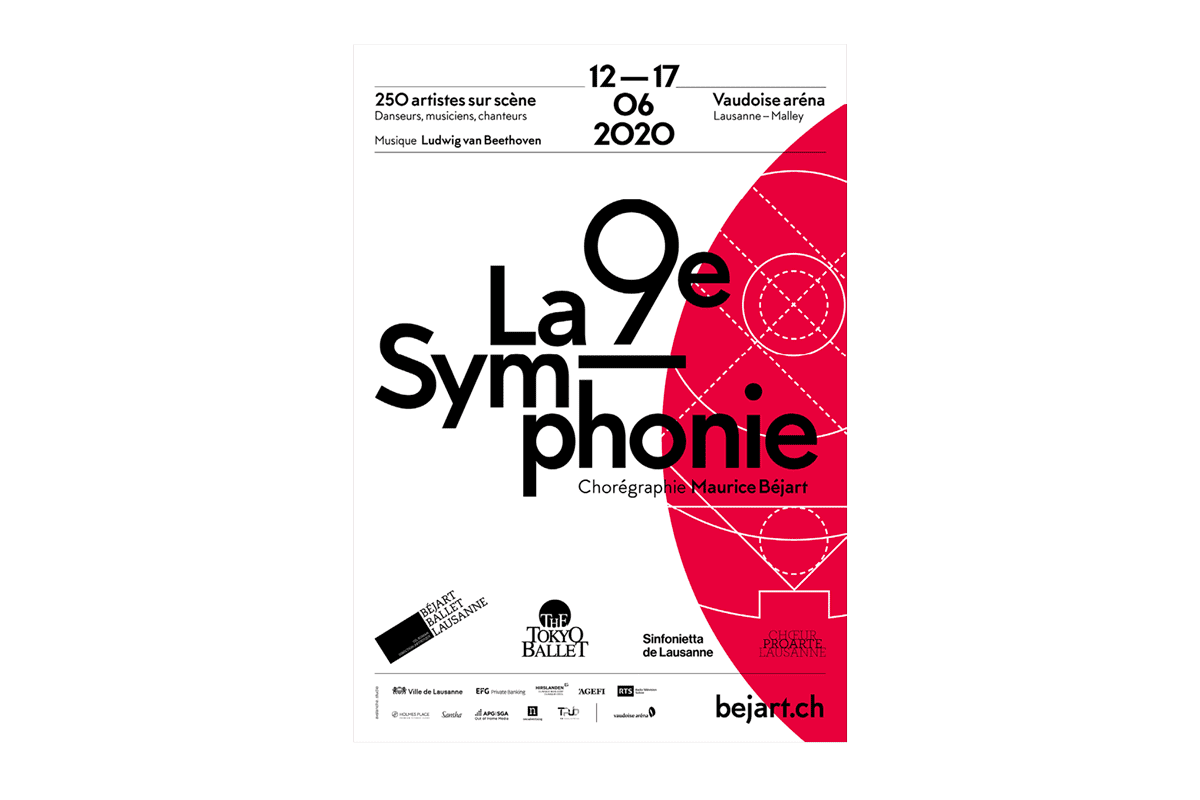 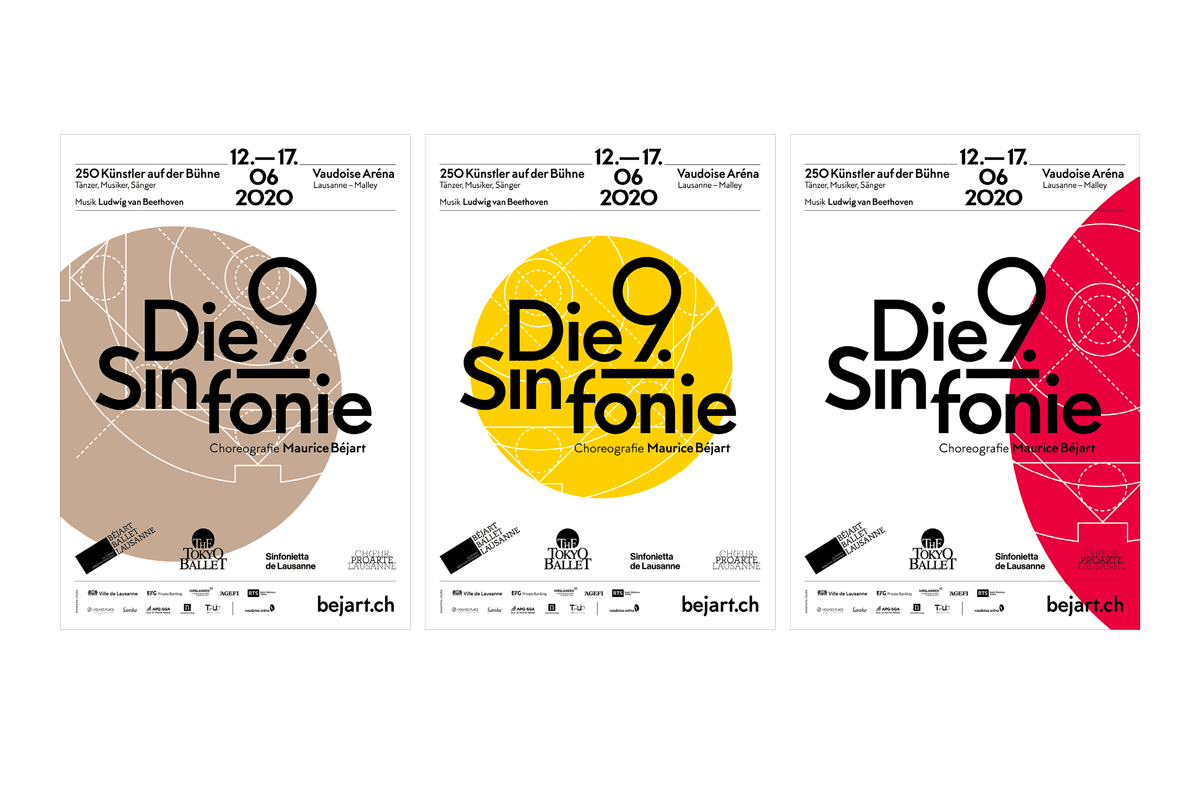 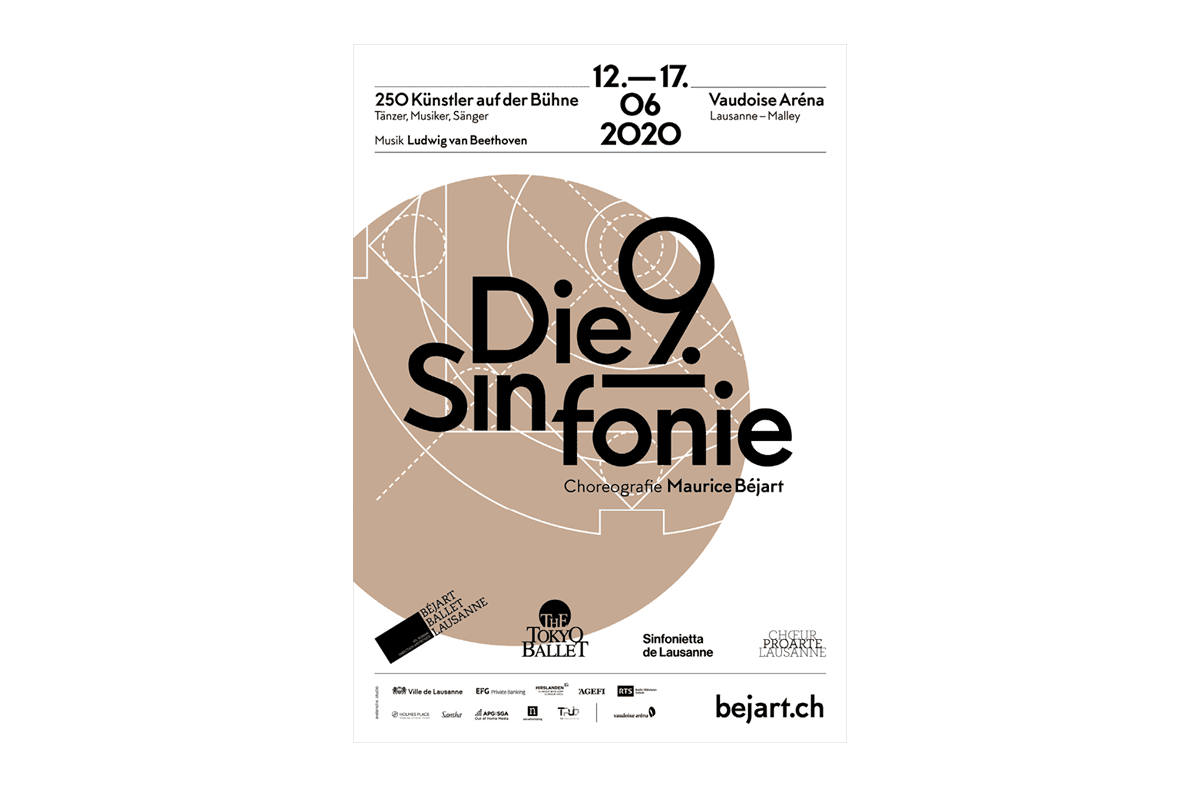 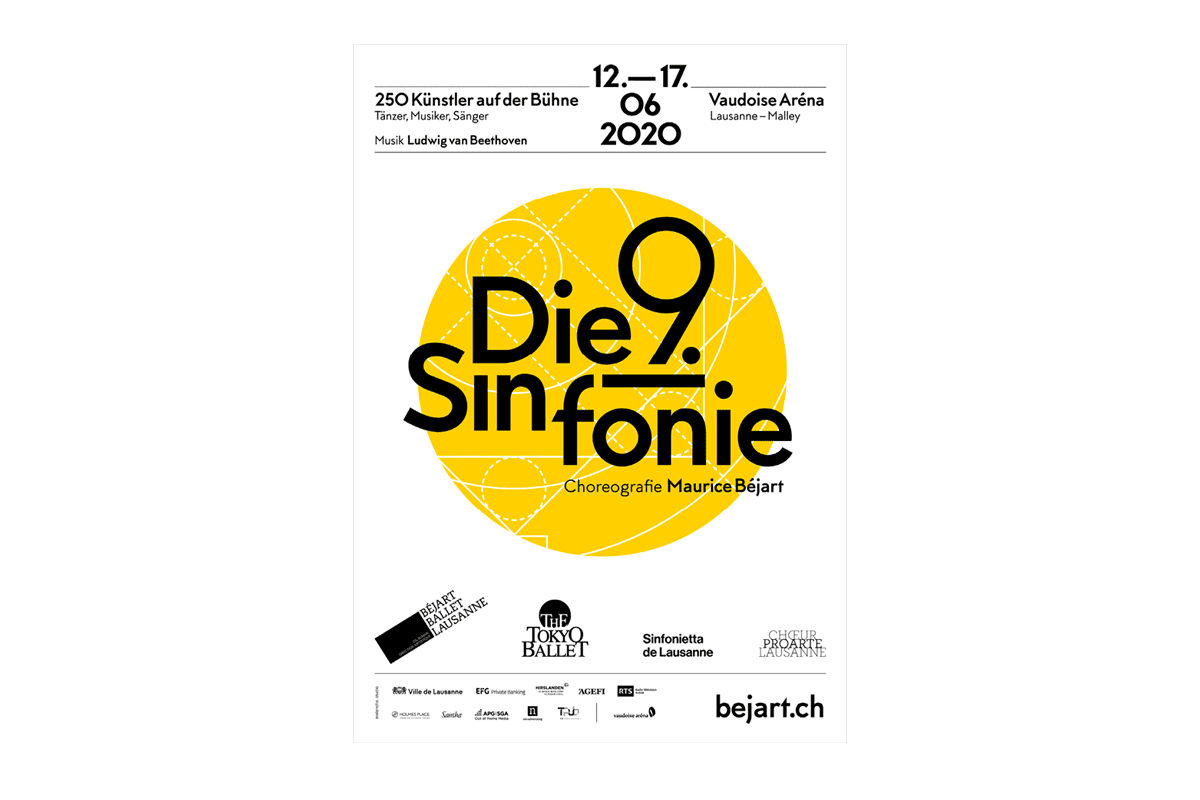 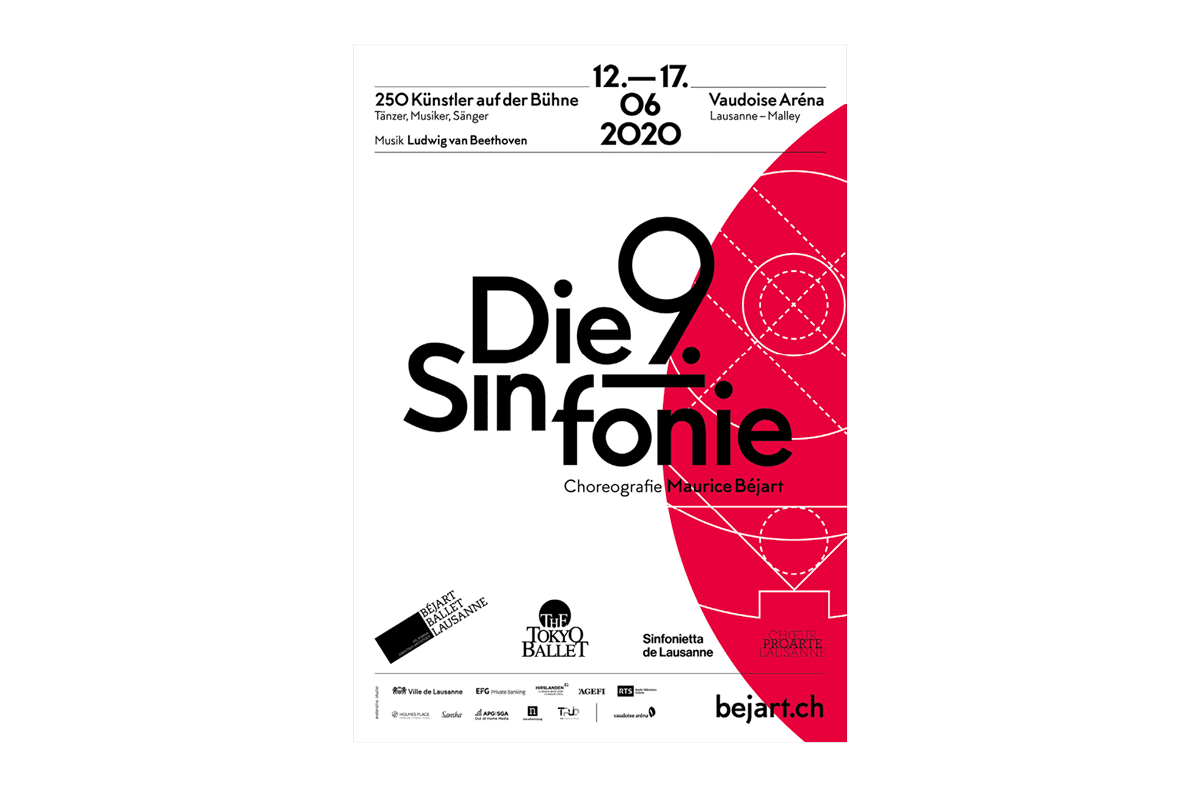 The visuals for Ludwig van Beethoven’s Ninth Symphony choreographed by Maurice Béjart are displayed on the streets of both the French and German-speaking parts of Switzerland. These posters were designed by Avalanche studio, a Montreux-based creative agency.

More than 250 artists of all nationalities, representing the Béjart Ballet Lausanne, the Tokyo Ballet, the Sinfonietta de Lausanne and the Pro Arte Choir of Lausanne under the direction of David Reiland, will gather on stage from 12 to 17 June 2020 at the Vaudoise Aréna (Lausanne-Malley) to perform Ludwig van Beethoven’s Ninth Symphony choreographed by Maurice Béjart. This artistic manifesto for a united humanity, culminating in Schiller’s Ode to Joy, strengthens the bond between peoples to defend them against the madness of the world.

Starting this spring, the new posters will be on display in the streets of the French and German-speaking parts of Switzerland. These graphic posters are inspired by Maurice Béjart’s choreographic codes: the circles represent uniqueness and are a nod to the patterns printed on the dance carpet, as well as the lines outlining the carpet on which the two dance companies will perform. The four colors – brown, red, white and yellow – refer to the four movements of the ballet and are an expression of the gathering of peoples.

This national campaign was developed by the Montreux-based graphic design agency, Avalanche studio.

Since its premiere at the Cirque Royal in Brussels in 1964, The Ninth Symphony has travelled the world, from the Olympic Games in Mexico City (1968) to the Verona Arena and Piazza San Marco in Venice in 1975, or from Tokyo’s NHK Hall for the Tokyo Ballet’s 50th anniversary in 2014 to Lausanne the following year. In 2020, the Japanese capital will host the first shows from April 25 to 29 at the Bunka Kaikan.

“The Ninth Symphony is not only a ballet but a profound human involvement in a work that belongs to all humanity and that is not just performed and sung here, but danced.”