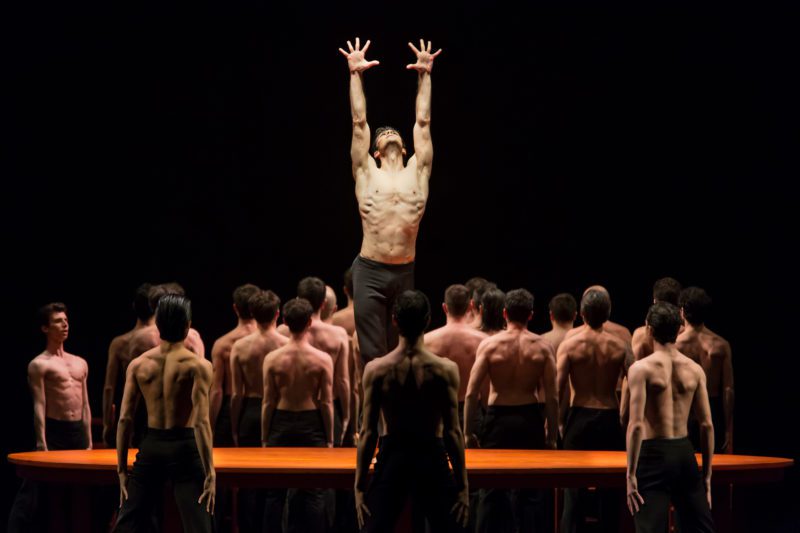 The Béjart Ballet Lausanne is back at the Cirque Royal to perform five shows from March 17 to 20, 2022. The program is stunning:  Tous les hommes presque toujours s’imaginent, a ballet by Gil Roman presented for the first time in Belgium, 7 danses grecques by Maurice Béjart and Bolero by Maurice Béjart, with the exceptional participation of the internationally renowned Italian star dancer, Roberto Bolle.

Bolero‘s “Melody” was set to Duska Sifnos by Maurice Béjart in 1961 in Brussels and has been performed by a Béjart Ballet Lausanne dancer since its creation. Gil Roman also sometimes offers this epic ballet’s main role to great artists who are friends of the company. This is the case in Brussels for two of the five performances at the Cirque Royal from March 17 to 20. Roberto Bolle, the internationally recognized Italian star dancer, will be on the red table on March 18 and 19 (evening) following the company’s Artistic Director invitation. This will be the second time he performs the role after La Scala in Milan in 2018, but it will be his first time dancing “Melody” at the Circus with BBL dancers.

Roberto Bolle was trained at the Academy of the famous Milanese institution and was named Étoile in 2004 at La Scala. Since then, he has danced in the world’s greatest theaters with the most prestigious companies (the American Ballet Theatre, which nominated him principal dancer in 2009, the Opéra National de Paris, the Bolshoi Ballet, the Mariinsky-Kirov Ballet and the Royal Ballet). Since 2008, the artist organizes his annual “Roberto Bolle and Friends” Gala, which is held at exclusive venues (the Colosseum in Rome, Piazza Duomo in Milan, Piazza Plebiscito in Naples or San Marco Square in Venice).

Tous les hommes presque toujours s’imaginent, a ballet by Gil Roman with music by New York composer John Zorn, will be performed for the first time in Belgium. The choreographer was fascinated by the plurality and density of the avant-garde musician’s work. He leads us on an inner journey across 14 titles drawn from his diverse catalog. A motionless journey filled with angels and dark heroes, shadows and lights that light up the stage on either side of a wall, a mirror of his time. Tous les hommes (…) was acclaimed at the Cannes Dance Festival and at the Odeon of Herod Atticus in Athens. It exudes life, love and hope.