The Béjart Ballet Lausanne just released the poster for the show that celebrates its return to the stage of the Beaulieu Theater, which was closed for three years for renovation. From December 16 to 22, Gil Roman will present a choreographic masterpiece by Maurice Béjart. This ballet was created in 1982 in Brussels and has never been danced by his company before. It will be performed in a new setting, giving it a special resonance. 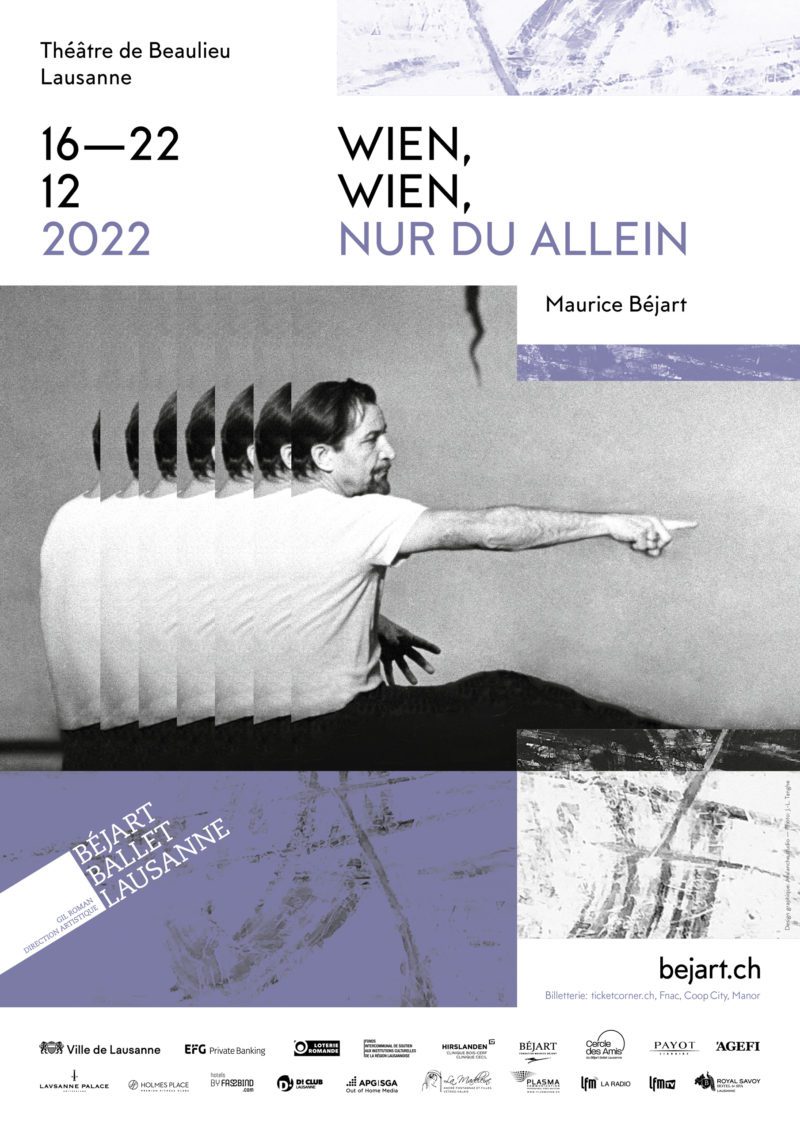 1982, Brussels. Maurice Béjart is in the studio working on the final details of his new show, Wien, Wien, nur du Allein. Jean-Luc Tanghe, a regular backstage photographer at the Ballet du XXe Siècle, captures the choreographer sitting with his arm outstretched in front of soloist Marcia Haydée. Marc Bally, from Avalanche.studio in Montreux, was inspired by this historical black and white picture and chose to preserve Maurice Béjart’s energetic movement, pointing elsewhere. A place beyond, which he puts at the center of the new poster announcing the return of the Béjart Ballet Lausanne at the Beaulieu Theater next December, three years after closing for renovation.

Wien, Wien, nur du Allein holds a special place in Maurice Béjart’s repertoire. It’s is an iconic ballet that belongs to the history of dance. That’s because of its choreographic complexity, the demands placed on the dancers, as well as its purpose: Maurice Béjart imagined it as a metaphor for the end of a cycle of humanity, putting fourteen survivors of a cataclysm in a bunker, until the final dance.

Is it a coincidence or just luck? The company rediscovered “Wien, Wien” in its Lausanne studio forty years after it was created. This happened at a time when the pandemic was imposing its laws throughout the world, with confinement as the last hope, while great music from the Viennese school of choreography (Haydn, Mozart, Beethoven, Schubert, Strauss, Schönberg, Alban Berg, Webern) echoed in the BBL. Maurice Béjart wrote the following about his ballet: “Vienna, a dream, a hope, a slow decadence, the memory of a certain past, Vienna, prisoner of its own legend, Sodom and Gomorrah of a river that embodies the Waltz, a waltz that spins like the planets. From this point, one can imagine all kinds of stories…”.

Gil Roman asked Lausanne-based scenographer Magali Baud to create a new set for the revival of Wien, Wien, nur du Allein, which will be given for the first time in Lausanne.