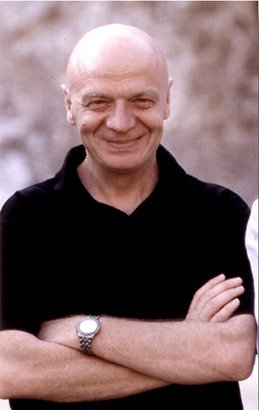 Micha Van Hoecke was born in Brussels in 1944, to a Russian mother, a singer, and a Belgian father, a painter. His personality was shaped by this combination of cultures and talents. He began studying classical dance in Paris under Olga Preobajenskaja.

In 1960, he joined Roland Petit’s dance company, then in 1962, he joined Maurice Béjart‘s. He appeared in many films and documentaries on creations of the Ballet du XXe Siècle, in particular, the The Rite of Spring and Messe pour le temps présent, in Avignon. In these pieces, he not only danced but also gave rhythm to different moments of the ballet. He was an actor as a teenager, playing in films by Yannick Andrei, Hervé Brombergé, Pierre Granier Deferre and later in Les uns et les autres by Claude Lelouch.

Micha had an outstanding voice and a lot of imagination. He was often the life of the party, and could sing traditional Russian songs that gave you goose bumps. He also enjoyed singing popular songs from the “Marolles” (a working class neighborhood in Brussels) with accents, while playing the guitar or imitating different musical instruments with his mouth.

One cannot forget his outstanding interpretation of Petrouchka in the ballet Nijinski, Clown de Dieu, alongside Jorge Donn, Suzanne Farrell, Victor Ulatte, and the other avatars of the great Russian dancer, such as Paolo Bortoluzzi in Le Spectre de la rose and Daniel Lommel in le Faune. We could add a long list of ballets in which Micha also played an important role: Baudelaire, Symphonie pour un homme seul, Romeo and Juliet, Golestan ou le Jardin des Roses etc. We can assume that Maurice Béjart was inspired by him to create Mudra. Béjart had been pursuing “Total Theatre” for a long time, and he needed new performers.

When it was created in 1970, Mudra was described as a “European Center for Research and Development of Performers”, even though Mudra means “gesture” in Sanskrit. Micha was always curious about everything that went on there, and quickly developed a strong and fraternal bond with the students and teachers, in particular with Fernand Shirren, Mudra’s brilliant rhythm teacher.

Maguy Marin soon became Micha’s partner and the ties he created with the “Mudrists” made him want to found a company with those who wished to join. In the summer of 1972, he hired a group of “Mudristes”, still in training, for a performance in Avignon on the theme of Antigone alongside Caroline Carlson and Larrio Ekson. In 1973, the ” Chandra” company (moon in Sanskrit) was born. Dominique Bagouet, another lost master, joined the company despite feeling that his time in Maurice’s company was coming to an end. As a welcome gift, Béjart created “Les Tarahumaras” by Antonin Artaud, and Micha created Les Vallées du songe inspired by Russian poetry.

These two “Ballet-theaters” were part of the first touring program of this young company. It was a short-lived adventure however, because after a little more than a year, several members of the first class wanted to go their own way. During this period, Micha created Sequenza 3 to the music of Luciano Berio, which he performed with Maguy Marin. When “Chandra” ceased its activities, Micha returned to the company and Maguy Marin joined him. This was the time of “Yantra”, a group created by Maurice Béjart within the ballet, which gave birth to Notre Faust, among others. Maguy played Faust as a child and Micha soon replaced Maurice in one of the two main roles, along with Yann Legac. He performed it brilliantly and revealed Micha as a powerful performer and a great actor. Another memorable consecration followed: Offenbach’s character in Gaîté parisienne… an extraordinary synthesis of Micha’s multiple talents and facets. His dancing was brilliant and mischievous, often defying classical standards.

Micha also worked on pieces for the Ballet du XXe Siècle during this period: Les Mariés de la Tour Eiffel, la Valse de Ravel, La Rapsodie Espagnole, etc At that time, Maurice Béjart gave carte blanche each season to dancers who were interested and their creations were presented at the small hall of La Monnaie. Micha left his mark on the audience during these performances called “Young choreographers”, in particular with Le journal d’un fou, based on a short story by Nicolas Gogol.

It was only natural that Maurice would entrust his Mudra school to Micha one day, which he did from 1979 to 1981. This is a good opportunity to talk about Micha’s twin sister, Marina, a remarkable woman who also passed away and who taught classical dance for many years at Mudra and at the Brussels Dance Conservatory.

Micha was a creator who became more interested in his own creations and less in teaching. In 1981, he set up a new company, “L’Ensemble”, with Mudra’s best dancers of the time, and settled in “la Maison de la Culture” in Tournai. Monsieur, Monsieur was the first ballet he created for the new company. In 1984, he moved to Italy with his company and remained there until his death on August 7, 2021. He created many choreographies for “L’Ensemble” and collaborated with La Scala in Milan, the Teatro Verdi in Pisa, the San Carlo in Naples, the Montepulciano Festival, the Florentine Musical May, the Victor Ullate Company, the Athens Opera, etc.

He maintained a close partnership with the Ravenna Festival from 1990 onwards, where he directed La Muette by Portici d’Auber in 1991. Between 1997 and 2002, he was the Artistic Coordinator and Main Choreographer of the Teatro Massimo Ballet of Palermo, and of the Castiglioncello Festival.  As a director, he also worked on several productions at the Ravenna Festival (Carmen, Macbeth, Faust) and at the Rome Opera (Aida, Carmina Burana). From 2010 to 2014, he was the director of the Teatro dell’Opera Ballet in Rome. He also collaborated with the greatest performers, such as Carla Fracci, Alessandra Ferri, Ute Lemper, Luciana Savignano, and with great directors such as Luca Ronconi, Liliana Cavani, Claude Lelouch or Roberto De Simone.

We will deeply miss this versatile and prolific artist, endowed with a charismatic personality, as well as a generous and benevolent character. He had a great soul and a well-rounded mind. He had a profound sense of theater. His creations always carried a perfume of poetry: beauty, delicacy, strong emotions and humor were always present. He also knew how to make fun of himself. Although he treated his work very seriously, he could always laugh at himself.

The death of Micha van Hoecke is a source of great sorrow for those who knew, loved and appreciated him. We would like to express our condolences to Miki Matsuse, who was by his side for many years, as his partner, interpreter and collaborator.